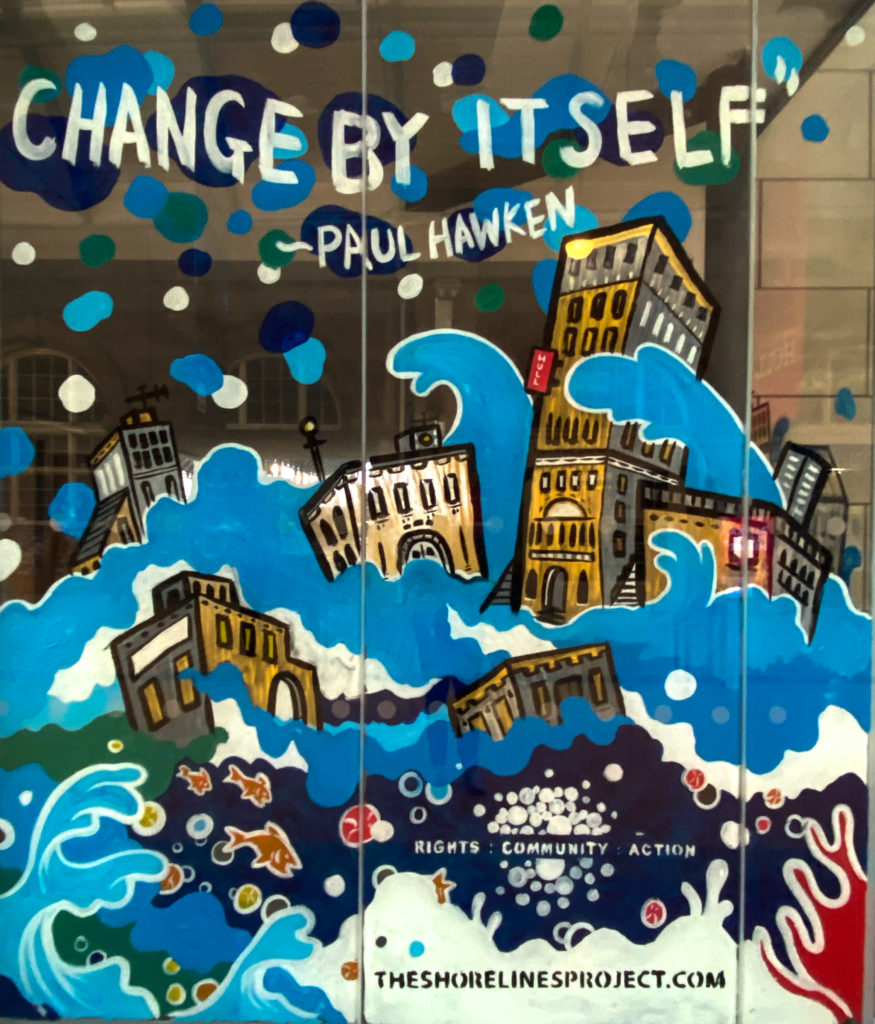 The second mural piece as part of The Shorelines Project, an art and activism project launched last October by social action group, Rights : Community : Action, was revealed today, having been completed in just 12 hours.

As part of the 18-month community engagement campaign, mural number two came to life with the aim of empowering Hull’s residents to be better informed, educated and prepared for climate change. A series of 10 murals will be seen popping up over the city to act as a reminder of the real risks the city faces if no immediate action is taken.

Named ‘All is Connected’, the piece highlights the fragility of our world’s ecosystems and how climate change affects everything. The oceans play a vital role in cities like Hull, helping to regulate river flow. Globally the oceans also produce between 50 and 80% of the world’s oxygen, meaning the fragile ecosystems need preserving.

Ocean Conservationist Nicky ‘Nemo’ Smedley approached The Shorelines Project to offer her extensive knowledge in protecting the underwater environment and brought to life just how important the sea is to a city like Hull, a city built on the edge of a tidal river and a city whose fortunes were transformed because of the fishing industry.

Working in partnership with a range of partners including PADI, Project Aware, Bite Back, The Shark Trust, Nicky brought the vision to Calvin Innes, artist and creative director at Drunk Animal, who used it to inspire his ‘All is Connected’ mural.

“I’ve been campaigning against climate change and ocean conservation for years so when The Shorelines Project arrived in the city, I knew I had to get involved.

The ocean is the largest habitat on the planet, it is the most exploited, yet the least protected. People don’t realise the huge role it plays in our lives, and particularly those in Hull; it has literally fuelled the city’s prosperity since the 1800s. This mural connects the land to the sea, and will help to educate people on the vulnerability of our environment, oceans and planet as a whole.”

Thanks to Transpennine Express, the mural sits proudly in a free commercial unit at Hull Paragon Interchange. The piece is in stark contrast to the first, darker mural piece, The Girl, which can be seen on the Hull College building adjacent to George Street. Painting directly onto the window of the unit, Calvin worked on the inside so the mural can be seen by passers-by. It also had to be installed back to front, creating an added challenge to the installation.

The piece was completed in just under 12 hours and will remain in place for the new few months. “Seeing the completed piece in Hull Paragon Station and knowing that I could contribute even slightly feels like a huge honour,” said Nicky. “I’m hoping it’s going to send out a strong message that protecting our oceans for the sake of our future is vital.”

“Climate change is happening; it’s now an inevitable part of our future; but as a city, we are not prepared for its long term impacts. More needs to be done to safeguard the city and its communities for the future. We want the Shorelines Project to act as a lasting reminder to the people of Hull that its future can be re-written if we work together to demand change.

“Art has the power to transport people to an imagined future where climate change doesn’t have to be an issue. By using art, and delivering it through a community-led engagement programme, we hope we’ll be able to empower the Hull community and give them the confidence to know that they have the collective power to tackle it head on.”

“We want Hull to lead the debate in climate change. The city has the potential to become the leader in flood prevention, but only if the community raises the issue to the highest levels. Through our art project, we want to empower communities and make them believe that their voice is valid; it’s essential in the fight against global warming.”

For exclusive content and sneak peeks as murals start to come to life across the city, follow The Shorelines Project on social media. To get involved in the next mural, visit www.theshorelinesproject.com.

You can also see the great work Nicky ‘Nemo’ Smedley does by following her across Facebook and Instagram: @NickySmedley and @nickynoodles70.

To find out more about the project, its murals and how you can get involved, visit www.theshorelinesproject.com.

To arrange interviews and photography opportunities, or to enquire about getting involved in the project, please contact:

Head of PR and Communications